Public health officials have identified 45 cases of monkeypox across 15 states and the District of Columbia, up from 21 the week before, U.S. Centers for Disease Control and Prevention director Rochelle Walensky, M.D., said during a media briefing, while more than 1,300 cases have been detected globally in 31 countries. However, no deaths have been reported and no community transmission of monkeypox has yet been detected in any U.S. cities, CDC officials said.

The majority of cases, 75 percent or more, appear to have been contracted during international travel, officials said. Others have developed infection here through close contact with a known monkeypox case.

During the briefing, Walensky knocked down concerns that monkeypox could be transmitted through airborne particles. “Monkeypox is not thought to linger in the air and is not typically transmitted during short periods of shared airspace,” Walensky said. “The virus is not thought to spread through interactions such as having a casual conversation, passing in the grocery store, or touching the same items, such as a doorknob.”

But people can contract monkeypox through respiratory secretions during “close, sustained face-to-face contact,” Walensky added. However, the virus most often “spreads through direct contact with bodily fluids or sores on the body of someone who has monkeypox, or with direct contact with materials that have touched these bodily fluids and stores such as clothing or linen.”

The monkeypox virus involved in this global outbreak appears to be milder than other strains, which can cause a rash on multiple places across the body as well as flu-like symptoms, Walensky said. The rash can look like sexually transmitted diseases (STDs) such as herpes or syphilis, Walensky warned. Doctors should test for the monkeypox virus in suspected STD cases.

The United States has enough smallpox vaccine to “vaccinate millions of Americans if needed” against monkeypox, Dawn O’Connell, assistant secretary for preparedness and response with the U.S. Department of Health and Human Services, said during the briefing. 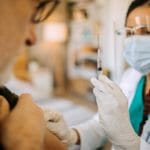