WASHINGTON, DC — While it is established that interstitial lung disease (ILD) is linked with higher morbidity in patients with rheumatoid arthritis (RA), insights into the long-term progression of pulmonary impairment in such patients are lacking. Findings to be presented at the 2016 annual meeting of the American College of Rheumatology (ACR) will offer some initial clues.

Researchers at the Mayo Clinic in Rochester, Minnesota, conducted a study of 167 patients with a mean age of 67 years at the time of diagnosis, 62 of whom had never been smokers. For inclusion, patients had to have been evaluated for at least 4 weeks and had at least 1 pulmonary function test (PFT) during their care.

Patients were followed for a median time of 3.3 years after ILD diagnosis. The authors defined progression as a diffusing capacity of carbon monoxide (DLCO) <40%, being too ill to perform the test, or a predicted forced vital capacity (FVC) <50%.

“This is especially true for patients in whom early decline is detected in the first months of disease. Patients with RA-ILD require particular attention to their cardiopulmonary status, and patients who have a rapid decline must be followed most closely,” he told Rheumatology Advisor.

Dr Matteson suggests that future research in this area should aim to clarify the precise mechanisms involved in interstitial pulmonary fibrosis in RA and to predict which patients will develop progressive lung disease over the course of their disease. “Thus far, there are no definitive therapeutic options for RA-ILD, and this remains a major area of clinical need,” he said. 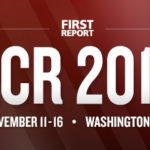 American College of Rheumatology 2016 Annual Meeting: What to Expect