Kenneth Saag, MD, MSc, Jane Knight Lowe Professor of Medicine in the Division of Clinical Immunology/Rheumatology at the University of Alabama at Birmingham (UAB) and Professor of Epidemiology at UAB School of Public Health, discusses the ACTIVExtend study (ClinicalTrials.gov Identifier: NCT01657162).

A transcript of this interview is available below.

Hi, I’m Ken Saag and I am the Jane Knight Lowe Professor of Medicine in the division of clinical immunology and rheumatology at the University of Alabama at Birmingham. It is a great pleasure to have a chance to speak with you about the ACTIVExtend study that I just had an opportunity present here at the American College of Rheumatology (ACR) annual meeting.

Can you tell us about this study and its clinical implications?

Abaloparatide is a parathyroid hormone (PTH)-related peptide analog that has been shown in clinical trials to both increase bone density and to reduce the rate of vertebral and nonvertebral fractures. The purpose of this study was recognizing that with an anabolic agent like PTH-related peptide — this is a drug that we’re only to be using for an 18- to 24-month period — the question really becomes, “What do you do after this period of treatment?” So, the patients who finished the ACTIVE study had an opportunity in either the placebo arm or in the abaloparatide arm to switch over to alendronate and they were then followed up through month 43.

During that period of time we saw continued sustained reduction both in the rates of vertebral and nonvertebral fractures — an 87% reduction overall in vertebral fractures and a very significant reduction in nonvertebral fractures, clinical fractures, and major osteoporotic fractures was seen. So, this is encouraging information, coupled with increases in bone density that were seen that were maintained and appropriate behavior in terms of the turnover markers as would be expected when patients were switched over to alendronate. This suggests to us that, as is the standard now, when we use an anabolic agent we can add in an antiresorptive — such as in this case alendronate — and see continued sustained reduction in fracture risk.

The safety looked good and there wasn’t an increase in serious adverse events. There wasn’t an increase in hypercalcemia. In fact, if anything, abaloparatide looks better than some of the other choices for reducing the rise in calcium that is been seen with the use of drugs like teriparatide. So, this is additional news that has clinical relevance in where this drug might fit in.

We think this is a therapy that should be used in the setting of postmenopausal osteoporosis, particularly among those patients who are very high risk: those that have significantly low bone mass, those who have had fractures previously. This would be a circumstance where considering the use of an anabolic therapy early on and then followed by an antiresorptive agent may make a lot of sense in trying to improve their bone health and reduce their fracture risk.

The NCT01657162 clinical trial was funded by Radius Health, the manufacturer of abaloparatide. 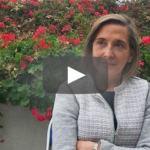 The Future of Precision Medical Care for Rheumatic Disease