Obesity is not associated with the development of lupus nephritis (LN) among patients with systemic lupus erythematosus (SLE), according to findings presented at the European League Against Rheumatism (EULAR) Congress held in Amsterdam, June 13 to 16, 2018.

Investigators conducted a retrospective, cross-sectional study in a longitudinal SLE cohort to explore body mass index (BMI) as a possible predictor for the development of LN in patients with SLE, taking into account prior studies that have indicated that elevated BMI increases an individual’s risk for chronic kidney disease.

The results of the study showed that after adjusting for age, gender, and ethnicity, BMI measured as continuous (P =.51) and categoric variables (overweight, P =.84; obese, P =.67) were not significantly associated with LN. Patients with SLE and obesity had lower disease activity measured by the Systemic Lupus Erythematosus Disease Activity Index, double-stranded DNA (dsDNA) titers, proteinuria, and higher complement levels.

The investigators concluded that there is no link between obesity and the development of LN among patients with SLE. Study participants with SLE and obesity had lower levels of disease activity, dsDNA titers, and complements levels. 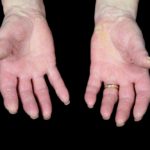