The use of colchicine is associated with reduced interleukin-6 (IL-6) and high-sensitivity C-reactive protein (hs-CRP) levels in patients with coronary artery disease (CAD), according to study results published in European Journal of Pharmacology.

This meta-analysis and systematic review included 11 clinical trials (9 studies on hs-CRP only; 2 studies on both hs-CRP and IL-6) published before October 2021 and were comprised of 749 patients with CAD treated with colchicine and 716 control participants with CAD. Data were collected from Embase, PubMed/MEDLINE, and the Cochrane Central Register of Controlled Trials. Weighted mean differences (WMDs) were used to compare hs-CRP and IL-6 level reduction between the colchicine and control groups.

Limitations of the study included the use of only 2 clinical trials that considered IL-6, the lack of evaluation on the safety of colchicine, high heterogeneity among included studies, and an inability to explain the relationship between decreased cardiovascular events and reduced inflammatory marker levels.

The study authors concluded, “[C]olchicine treatment was associated with a reduction in hs-CRP and IL-6 levels in patients with CAD.” However, they stated they “could not determine the individualized factors for treating patients with CAD based on available evidence,” which they indicated merits future research on “the effect of colchicine on inflammatory markers.” 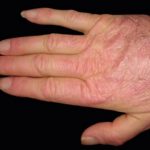 Dermatomyositis Protective for Some Aspects of COVID-19