Individuals with elevated Epstein-Barr virus (EBV) antibodies in the preclinical period have a likelihood of developing rheumatoid arthritis (RA), according to study results published in Arthritis & Rheumatology.

Research has shown that EBV persists in B cells with recurrent periods of activity. Although studies have shown a link between EBV and RA, the causal effect of EBV in the development of RA has not been established.

In a longitudinal cohort study, researchers investigated the role of EBV in the development of RA.

Among serum analytes, IgG-EA, IgG-VCA, and IgA-EA were among the top 20 most important variables for classifying RA cases. The IgG-EA antibody levels were significantly higher among patients with RA compared with control participants (0.82±0.72 international standardized ratio [ISR] vs 0.49±0.28 ISR, respectively; Holm-adjusted P =.001). In the preclinical period, IgG-EA levels were significantly correlated with serum IgM-RF (P =.007) among patients with RA, but not control participants (P =.15).

No difference was found in IgG-CMV antibodies between the groups, suggesting that the antibody response was specific to EBV and not due to general dysregulation of the immune system.

A limitation of the analysis was the study population, which only included individuals in the military and a higher percentage of men. 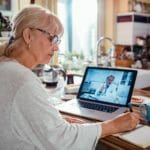