Cardiovascular disease (CVD) and cardiovascular risk factors (CVRFs) have associations with rheumatoid arthritis (RA) stemming from inflammation that are well documented in research. However, in recent years, dementia has also come to be associated with RA, and in fact, recent research is exploring the possibility that all 3 morbidities are interrelated.

Sebastian E Sattui, MD, MS, of the University of Pittsburgh School of Medicine, and his set out to explore whether patients with CVD/CVRFs, as well as RA, are at higher risk for dementia than those without RA.1

Elena Myasoedova, MD, a physician at the Mayo Clinic in Rochester, MN, and her team used a population-based cohort design to explore the association between RA and dementia as well, adjusting for more than 10 possible confounders, including CVD and CVRFs, in their recent study.2 The study found, in part, that incidence of dementia has decreased since the 1980s, but it highlighted the comorbidity of RA as it relates to dementia.

Inflammation is certainly one risk factor at the intersection of CVD, CVRFs, and RA that researchers suspect could be connected to dementia. Dr Myasoedova’s team is focused on exploring not only these associations but also possible prevention via medications such as disease-modifying anti-rheumatic drugs (DMARDs).

“The overall idea is that inflammation promotes cognitive decline, and antiinflammatory and antirheumatic medications may help prevent or decrease the risk of cognitive decline and dementia,” Dr Myasoedova said. “This is the hypothesis that we are uniquely testing using our population.”

Dr Sattui stresses that, though inflammation certainly plays an important role, the body of knowledge on Alzheimer’s disease and related dementias (ADRD) suggests that it may only contribute to a minority of cases.

“When we think about diseased blood vessels, we usually think of vascular dementia, but what neurobiologists and people who are more in the field have really taught us is that [vascular dementia] is not the pure form of it,” Dr Sattui said. “Most of the time, actually, the literature has shown a coexistence of different forms.”

Although there have been some promising findings related to the effectiveness of certain DMARDs, Dr Sattui says, it is too soon to tell whether this success isn’t partially attributable to factors specific to each RA patient.

“There’s been a significant interest from neurobiologists regarding the use of some of our medications potentially targeting those pathways of inflammation and dementia,” Dr Sattui said. “What we showed is there was benefit of the use of biologic agents and targeted synthetic agents compared to [conventional synthetic] DMARDs by themselves, but nothing specific to one mechanism of the disease. This probably speaks to the fact that better controlling the disease, which addresses all of the other comorbidities that are associated with RA, is potentially leading to the decreased risk of dementia, rather than a specific pathway itself.”

Dementia is likely the result of a confluence of comorbidities, Dr Sattui believes, both biological and environmental.

“Certainly, inflammation, cardiovascular disease and cardiovascular risk factors are leading to that, but maybe there are some racial and ethnic groups that might be at higher risk as well,” he said. “There are other factors that need to be teased out, like the role of chronic pain, which we know can actually increase the risk of dementia. Also, psychiatric comorbidities, like depression, have been shown to increase the risk of dementia, and are more prevalent in patients with chronic diseases and chronic pain, such as rheumatoid arthritis. These could also be factors that are actually driving or increasing the risk.”

Dr Sattui’s research found the 65-to-74 age range to be at highest risk for the onset of dementia in patients with existing CVD/CVRFs and RA, with the risk attenuating over time. The research team also noted a trend toward increased risk in patients aged 75-to-84 years with CVD at baseline. However, the finding was not statistically significant.

“The incidence rates that we found for [the] younger individuals with dementia were significantly higher even after age was adjusted,” Dr Sattui said. “It doesn’t allow us to compare with the general population, but certainly that is concerning, and it’s guiding part of our work and the work of others.”

Looking to the future, both physicians will continue to explore dementia and its associations, with hopes of making strides in its prevention. The emotional and physical anguish that it causes to patients and their families, and its current worldwide prevalence, is motivating researchers to act quickly.

Dr Myasoedova’s team, with the help of a crucial grant from the National Institute on Aging (R01 AG068192), has already continued its work around ADRD through the lens of rheumatology in its forthcoming research.

Avoiding ADRD completely should be the goal for young and middle-aged people, according to Dr Sattui, who plans to continue working to identify and attribute their rheumatic risk factors. He emphasizes, however, that such signs extend far beyond CVD/CVDRFs and inflammation, and are rooted in physical and emotional well-being.

“Where the money really is in the prevention of dementia,” he said. “We are focusing on an event that happens at age 65 and above or age 75 and above, but prevention starts several years before that. And when we talk about prevention, we’re not only talking about cardiovascular disease or modification of risk factors, but also lifestyle modifications: addressing mood disorders and increasing physical activity, which is across the board what really matters and influences everything. It’s also something that benefits patients with RA.” 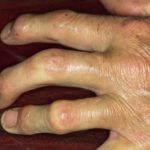