Individuals with rheumatoid arthritis (RA) with low disease activity had similar diastolic dysfunction compared with healthy controls as measured by E/A ratio, according to a study recently published in Clinical Rheumatology. Those with preserved ejection fraction may be at higher risk for diastolic dysfunction due to longer and more acute disease duration.

This study included 70 participants with RA and without cardiovascular disease, 77.1% of whom were women. Researchers also included 33 healthy controls (54.5% women) of similar age. Those with RA showed disease activity ≤3.2 on the 28-joint Disease Activity Score, indicating low disease activity between 2 and 7 years. The study researchers took measurements of parameters related to cardiovascular health, RA, and metabolism. Diastolic dysfunction (measured via E/A ratio) and ejection fraction were examined among all participants using Doppler and echocardiographic methods. The Kolmogorov-Smirnov test was used to test the normality of variables. The Kruskal-Wallis H test, chi-square test, Student’s t-test, and Mann-Whitney U test were used to compare controls and those with RA, as well as between subgroups.

Those with RA did not display significantly different E/A ratios compared with controls (1.08±0.28 vs 0.99±0.21). Although abnormal E/A ratios were likelier among those with RA (odds ratio, 1.4; 95% CI, 0.6-3.3), this difference was not significant. Compared with regular E/A ratios, lower ratios were associated with higher duration of disease and being older, as well as with greater disease activity and bone erosions. E/A ratio was negatively associated with age (P =.04) and concentration of triglycerides (P =.04). There was no significant difference in mean ejection fraction between those with RA and healthy controls.

Limitations to this study included small sample size, a single parameter for diastolic dysfunction, and a need for more parameters describing disease activity.

The study researchers concluded that “decreased E/A ratio may be the first sign of impaired diastolic function that occurs even in RA patients with continued low disease activity. Asymptomatic [diastolic dysfunction] may be diagnosed in RA patients by echocardiography and may be helpful in reducing CV mortality by introducing appropriate treatment at an early stage.” 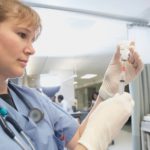 Retention of Subcutaneous vs Intravenous Tocilizumab in Rheumatoid Arthritis