In Korean patients with rheumatoid arthritis (RA), there are sex differences in clinical features and outcomes, according to study results published in Joint Bone Spine.

Previous studies have suggested there are several differences in men and women with RA, but these differences are inconsistent and may vary depending on various factors. The objective of the current study was to determine sex differences in clinical features and outcomes in a large Korean cohort of patients with RA.

The mean age and age at disease onset were both higher in men, whereas disease duration was significantly longer and DAS28, HAQ, and PRO scores were higher in women. Smoking and alcohol consumption were more common in men.

Generalized estimating equation models for repeated measures were used to determine sex differences in the change of DAS28 from baseline up to 3 years in patients with DAS28 3.2 or greater. Following adjustment for age, disease duration, baseline DAS28, and baseline treatment with disease-modifying antirheumatic drugs, sex had a significant effect on the rate of changes of DAS28 over time (P =.035).

Several factors were predictive for achieving clinical remission, including duration of disease, baseline DAS28, high monthly income, and seropositivity. Women with RA were at a significantly increased risk for not achieving remission.

The study had several limitations, including using subjective rather than objective measures, high rates of patients lost to follow-up, and potential age-specific effects according to sex hormone.

“Sexual dimorphisms in RA patients are often ignored by physicians in the clinical practice; the health professionals treating RA patients should be aware of these sex differences and take them into consideration in assessing patients and choosing treatment strategies, ” concluded the researchers. 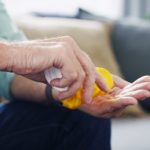