Lipid data was obtained from phase 2 and 3 clinical trials for participants with RA receiving either 2 mg (n=479) or 4 mg (n=997) baricitinib. Total cholesterol, LDL-C, HDL-C and triglycerides were determined using serum samples collected in a fasting state at baseline and weeks 12 and 24 after randomization. Results were compared with placebo control arms of the studies. Secondary outcomes evaluated the effects of statin use on baricitinib-induced lipid changes.

In the 6 placebo-controlled trials, baricitinib use resulted in dose-dependent increases across all lipid measurements from baseline up to 12 weeks and levels were stable from weeks 12 to 24 compared with placebo. However, these baricitinib-induced lipid profile increases were not associated with increases in overall LDL-C:HDL-C ratios.

Secondary results examining the effects of statins relied on data from patients on statins at baseline (n=221) or started statin treatment during the trial. Total cholesterol, LDL-C, HDL-C and triglycerides increased from baseline in both statin users and non-users. Overall, statin use did not modify the effect of baricitinib on lipids.

The study investigators wrote, “Increases in circulating lipid levels were seen following treatment with baricitinib that plateaued by 12 weeks of treatment. Increases in HDL occurred across all particle sizes, whereas LDL increases were confined to larger particles, with small LDL particle levels decreasing.” They also noted a possible mechanism, suggesting, “baricitinib increase in LDL particle size could be (due to) the increased activity of lipases such as phospholipase A2, hepatic lipase, lipoprotein lipase and endothelial lipase.” 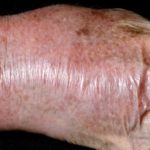 Comparable Safety Outcomes With Certolizumab Pegol, Other TNFis in RA