The toll-like receptor 4 (TLR4) pathway is not likely a relevant target in treating patients with rheumatoid arthritis (RA) who demonstrate an inadequate response to methotrexate therapy, according to research published in the Annals of the Rheumatic Diseases.

In total, 250 patients were screened for eligibility and 90 were randomly assigned to receive either placebo (n=29) or 5 mg/kg NI-0101 — a first-in-class humanized monoclonal antibody-blocking TLR4 — every 2 weeks for 12 weeks (n=61). All participants also continued methotrexate therapy. From each group, 57 and 29 patients (from treatment and control group, respectively) completed both the 12-week visit and the follow-up phase through week 24.

Overall, no major differences were noted between groups in terms of individual disease parameters, although patients in the NI-0101 group had a longer RA duration (8.5 vs 5.4 years) and were younger at the time of diagnosis (45.7 vs 51.2 years). The mean C-reactive protein (CRP) level was also higher in this group at baseline (18.3 mg/L vs 13.4 mg/L).

Both treatment groups demonstrated similar decreases from baseline to week 12 disease activity scores in 28 joints with CRP, with no significant between-group differences noted. Both Clinical Disease Activity Index and Simplified Disease Activity Index scores decreased approximately 40% from baseline to 12 weeks, and the proportion of patients who achieved good or moderate EULAR responses increased with treatment.

A pharmacokinetics profile of NI-0101 showed expected concentrations and elimination consistent with simulations. NI-0101 concentrations were maintained above the targeted threshold of 10,000 ng/mL in a majority of patients. In terms of pharmacodynamics, no significant differences between treatment groups were noted for all evaluated biomarkers.

NI-0101 infusions every 2 weeks demonstrated an acceptable safety and tolerability profile in patients with RA, with similar proportions of treatment-emergent adverse events occurring in both the placebo and treatment groups (51.7% and 52.5%, respectively). The most frequently reported adverse events were infections (13.8% in the placebo group and 11.5% in the NI-0101 group).

“The lack of significant effect of NI-0101 in this well-controlled prospective clinical trial indicates that blocking the TLR4 pathway alone is unlikely to benefit patients with established RA,” the researchers concluded. “The good NI-0101 safety and [pharmacokinetic] profiles support further exploration in other diseases.”

Disclosure: This clinical trial was supported by Novimmune SA. Please see the original reference for a full list of authors’ disclosures. 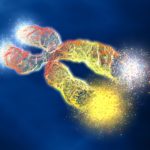