Ultrasound detection of synovitis has moderate practical ability to predict loss of remission in rheumatoid arthritis, according to a study published in The Journal of Rheumatology. Though this predictive power turned out to be lower than in previous studies, this study tested its efficacy and feasibility in different settings and real-life conditions.

This study followed 378 remission phases in 318 individuals with rheumatoid arthritis in a Swiss Clinical Quality Management cohort. Of all remission phases, 60% showed loss of remission. Synovitis detected on ultrasound also correlated with a higher hazard ratio of 1.2 to 1.5. Ultrasound detection of synovitis was linked with this decreased length of remission, with a median period of 2 to 5 months.

This link was more significant when ultrasound was conducted early in the remission period, with a 6- to 20-month median duration, and with an earlier follow-up period of 3 or 6 months. The researchers studied the period between a patient’s first ultrasound in remission and the start of their loss of remission.

Studies have shown an association between ultrasound-detected synovitis and increased rheumatoid arthritis flare-ups, but whether such predictive power would be useful in real-life scenarios is uncertain. To determine the real-life practicality of using ultrasound to predict loss of remission, researchers adjusted for pertinent confounders and conducted analyses for different ultrasound definitions and modes.

These results suggest “[ultrasound]-detected synovitis, particularly when [ultrasound] is performed early in clinical remission, has a moderate predictive power for loss of remission in a real-life setting.”

Zufferey P, Scherer A, Nissen MJ, et al; on behalf of the SONAR Group and the SCQM Foundation. Can ultrasound be used to predict loss of remission in patients with RA in a real-life setting? A multicenter cohort study [published online January 15, 2018]. J Rheumatol. doi: 10.3899/jrheum.161193 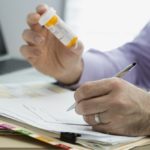