After 1 year of follow-up, no changes were observed on a group level; however, 6% of FDRs were diagnosed with axSpA, of whom 86% were HLA-B27-positive. There were no statistically differences in demographic, clinical, and imaging findings between HLA-B27-positive and -negative FDRs. Overall, HLA-B27 appeared to be independent of subclinical inflammation and instead associated with progression from subclinical inflammation to overt SpA.

Study limitations included the large population of patients with preexisting back pain (65%). Back pain was identified during the course of the study and many participants had not visited a physician or used pain medication for back pain. Overall, back pain was not a major complaint for participants and may not have been the sole reason for participation in the study. Researchers also noted that they could confirm the validity of the information provided by the FDRs.

“…In seemingly healthy FDRs of patients [with] axSpA, (sub) clinical signs of SpA features are frequently seen with an equal distribution between HLA-B27-positive and -negative FDRs. However, progression towards clinical axSpA is seen mainly in FDRs with HLA-B27-positivity and inflammatory back pain,” the researchers noted.

Disclosure: Some study authors declared affiliations with biotech, pharmaceutical, and/or device companies. Please see the original reference for a list of full disclosures. 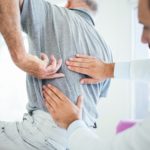