Globally, the burden of gout has increased annually from 1990 through 2017, according to the results of a recent analysis published in Rheumatology.

The study included data from the Global Burden of Disease (GBD) Study 2017, which quantified the magnitude of health loss from disease and injury by age, sex, and location over time. The GBD 2017 study included the case definition of primary gout according to the American College of Rheumatology (ACR) criteria.

Researchers collected annual data on gout from 195 countries and territories from 1990 through 2017. They categorized the countries by sociodemographic index (SDI), which ranged from 0 (low income and educational level per capita, and high fertility rate) to 1 (high income and educational level per capita, and low fertility rate). To quantify the time trends of gout burden, the researchers calculated total and annual percent change between 1990 and 2017.

Of the countries included in the study, the highest increases were seen in high-SDI countries, particularly in high-income North America. Researchers observed a nonlinear association between burden of gout and SDI, with the lowest gout burdens occurring at an SDI of approximately 0.6.

The most significant risk factor for gout burden was high body mass index.

Study limitations included the fact that clinical data records used in the GBD 2017 study were biased to individuals who had access to healthcare.

“More effective interventions, such as detailed and intensive dietary management and other prevention strategies for reducing obesity, should be carried out to reverse this trend, especially in [women] and high-SDI countries,” the researchers wrote. 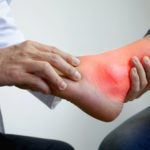