Little evidence was found in a review of recent literature that Lyme disease causes Alzheimer disease (AD) or Lewy body dementia (LBD). This perspective was published in Clinical Infectious Diseases.

Dementia occurring as a result of Lyme disease is reported more frequently in Europe due to the common causative bacteria in that geographic location. The best documented cases for dementia from Lyme disease have clinical features that resemble normal pressure hydrocephalus with abnormal cerebrospinal fluid biochemistry.

An infectious cause of Alzheimer disease has been proposed in the literature, with suspected microbes including herpesviruses, Chlamydophila pneumoniae, Porphyromonas gingivalis, Treponema spp, Helicobacter pylori, Propionibacterium acnes, Burkholderia spp, or fungi, as well as a polymicrobial causation. However, studies have not found evidence of these microbes in brain tissue among patients with Alzheimer disease.

There is also a lack of geographic correspondence between fatal cases of Alzheimer disease and Lyme disease in the United States. A study in Denmark did not identify a link between Lyme neuroborreliosis and long-term risk for dementia, Alzheimer disease, Parkinson disease, motor neuron disease, or epilepsy. A study in France of retired farmers did not report increased risk for dementia among individuals who were seropositive for one of the Lyme disease-causing bacteria, Borrelia burgdorferi sensu stricto. The review authors highlighted the fact that the lack of an animal model of B burgdorferi sensu stricto impedes investigators from adequately assessing the potential link between Lyme disease and Alzheimer disease.

The review authors cited multiple limitations of this case report, including sequencing and immunofluorescence assay approaches and discordance in the presence of B burgdorferi sensu stricto in the region where the case patient lived.

The review authors concluded there has been no convincing evidence published to date to support Lyme disease as a cause for Alzheimer disease or Lewy body dementia. 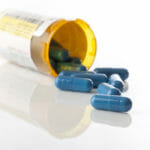