Hormonal and reproductive factors are correlated with the risk for knee osteoarthritis (OA), an effect that was significant in non-obese women both at early reproductive age and during midlife, according to a study recently published in Arthritis & Rheumatology.

All of these correlations were only significant at an early reproductive age and at normal weight. Those using hormone replacement therapy were more at risk for TKA than those not using it (HR 1.37; 95% CI 1.14-1.64), an association that was only present in non-obese women in midlife.

This study included records from the Melbourne Collaborative Cohort Study, which collected data between 1990 and 1994 on parity, use of OCs, hormone replacement therapy, menopausal status, years of menstruation, pregnancy, and age at first menstruation.

The study researchers used the Australian Orthopaedic Association National Joint Replacement Registry to determine occurrence of TKA between 2001 and 2013 in the cohort subjects. They made adjustments for midlife body mass index, change in body mass index, age, birth country, smoking status and history, level of education, and physical activity.

The study researchers concluded that “[reproductive] and hormonal factors were associated with risk of knee OA. These associations remained significant in women of normal weight at early reproductive age and in non-obese women at midlife. Further work is needed to understand the complex effect of these factors on knee OA.” 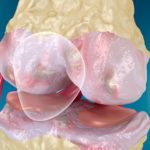