Patient-reported swelling did not perform well as a proxy for magnetic resonance imaging (MRI)-identified effusion-synovitis in patients with knee osteoarthritis (OA) and meniscal tear, according to the results of a study published in Arthritis Care & Research.

Baseline data were taken from participants enrolled in the Meniscal Tear in Osteoarthritis Research (MeTeOR) trial, a randomized clinical trial of arthroscopic partial meniscectomy (APM) vs physical therapy (PT) for management of symptomatic meniscal tears. A total of 276 participants were recruited from 7 academic referral centers between June 2008 and July 2011. Patients were ≥45 years, had a non-contrast MRI of the knee with evidence of meniscal tear extending to the meniscal surface, and had at least 4 weeks of meniscal symptoms.

One limitation of the study was that although effusion-synovitis identified on non-contrast MRI is frequently used as a proxy for effusion and synovitis in clinical studies, non-contrast MRI cannot be used to differentiate between effusion and synovitis. In addition, clinical assessment of effusion via physical exam was not recorded as part of the trial, and the authors could not evaluate the relationship between clinical exam evidence of effusion, MRI-identified effusion-synovitis, and patient-reported swelling. The investigators noted that this would have been useful in limiting the role of participant subjectivity. Also, the inclusion of patients with concurrent OA and meniscal tear made it difficult to discern whether OA, meniscal tear, or a combination of the two drove patient-reported swelling or effusion-synovitis as noted on MRI.

Please see original article for a full list of disclosures. 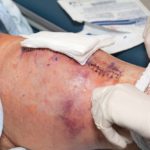