Severe periodontitis was found to be significantly associated with osteoarthritis (OA) in middle-aged and older individuals with type 2 diabetes (T2D), according to study results published in Arthritis Care & Research (Hoboken). Researchers noted that these findings may imply that oral inflammation in patients with periodontitis may be partially involved in the pathogenesis of OA, particularly among those with T2D.

To assess whether the severity of periodontitis was related to OA in T2D, the researchers conducted a study based on data obtained from the 2008 to 2015 cross-sectional Korean National Health and Nutrition Examination (KNHANES) survey.

Household samples were randomly chosen using a stratified, multistage design that was based on sex, age, and geographic area. Participants were requested to respond to a 4-part questionnaire that included a health interview, a health behavior survey, a health examination, and a nutrition survey. Periodontitis was evaluated using the Community Periodontal Index (CPI) scoring system; CPI scores ranged from 1 to 4, with scores of 1 to 3 indicating nonsevere periodontitis and scores of 4 denoting severe periodontitis in 1 or more sites. Osteoarthritis was defined as Kellgren-Lawrence grade 2 or more on radiographic images of the hip or knee area with joint pain.

A total of 3527 participants (aged ≥50 years) from the KNHANES survey were included in the current analysis. After adjusting for sex, age, body mass index, alcohol consumption, smoking status, education level, regular exercise, household income, presence of hypertension, and frequent tooth-brushing, participants with T2D were found to be more likely to have OA as the severity of their periodontitis increased (nonsevere periodontitis, odds ratio [OR], 1.23 [95% CI, 0.67-2.32]; severe periodontitis, OR, 3.01; [95% CI, 1.51-5.84]). However, this positive association was not observed among individuals without T2D, after adjusting for the same variables.

Study limitations included the inability to infer a causal relationship between periodontitis and OA because of the cross-sectional nature of the study and the lack of generalizability to ethnic groups other than the East Asian population.

Researchers concluded that additional research was warranted to elucidate the exact mechanism by which periodontitis was associated with OA. 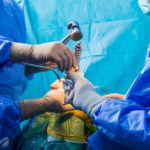