Previous studies have reported that patients with type 2 diabetes have increased risk for fracture despite normal or increased bone mineral density (BMD), supporting the theory that factors other than BMD may contribute to bone strength and fracture risk. The noninvasive imaging modality QCT can measure volumetric BMD (vBMD) and provide additional important data on fracture risk.

The goal of the current study was to assess bone characteristics evaluated by QCT and other metabolic factors that may affect bone health in Chinese patients with normal glucose tolerance, impaired glucose tolerance, or diabetes.

The cross-sectional population-based study was based on the Pinggu Metabolic Disease Study conducted in the Pinggu district of Beijing, China, between September 2013 and July 2014. All patients completed an oral glucose tolerance test, and measurements were taken for hemoglobin A1c (HbA1c), fasting glucose levels, and additional blood and urine tests. QCT analysis of the total vBMD of the lumbar vertebra 2 to 4 (L2-L4) was performed with Mindways QCT pro 5.0 v software (Mindways software, Inc, Austin, Texas) calibrated with an Image Analysis QCT phantom.

The researchers acknowledged that the study had several limitations, including the cross-sectional design, no data on dietary and lifestyle factors or the prevalence of osteoporosis from the study questionnaire, and missing data on other risk factors for osteoporosis.

“This is the first time, among Chinese population-based subjects, that the prevalence of osteoporosis evaluated by QCT was reported in participants with different levels of glucose tolerance,” concluded the researchers. 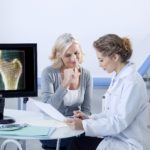