Among patients with obesity undergoing bariatric procedures, roux-en-Y gastric bypass (RYGB) is associated with a significantly higher risk for osteoporosis, vitamin D deficiency, and osteoporotic fractures compared with sleeve gastrectomy (SG), according to a retrospective cohort study presented at the American College of Gastroenterology (ACG) 2021 Annual Meeting, held from October 22 to 27, 2021, in Las Vegas, Nevada and virtually.

Many studies have evaluated the incidence of metabolic bone complications after bariatric surgery; however, data are lacking comparing bone health after RYGB and SG. Using TriNetX, a federated, multi-institutional research network, researchers identified patients who underwent RYGB or SG and clinical outcomes were compared between the 2 groups.

The primary outcome of the study was the rate of major fractures at 3 years after the procedure, and other outcomes included the rates of spine fractures, femur fractures, osteoporosis, and vitamin D deficiency. After unmatched analyses, a propensity score matched analysis was performed based on age, race, gender, diabetes mellitus status, and nicotine dependence.

At 3 years follow-up, the researchers found in the unmatched analysis that patients with SG were less likely to have major fractures than patients with RYGB (2.67% vs. 4.03%). In addition, lower rates of spine fractures, femur fractures, osteoporosis, and vitamin D deficiency were noted.

Following propensity score matching, the results were similar, with SG patients being less likely to have major fractures than RYGB patients (2.84% vs. 3.86%). High rates of vitamin D deficiency were also noted in both groups (32.42% and 35.33% in the SG and RYGB groups, respectively). However, patients in the SG group were at a significantly lower risk for vitamin D deficiency, spine fractures, and femur fractures.

“Thus, in patients with a higher baseline osteoporotic risk, SG may be a preferred option; however, further studies are needed to further explore this association,” the investigators concluded. 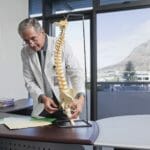 Abaloparatide Promising for Men With Osteoporosis