The findings of a meta-analysis published in Osteoporosis International suggested that selective serotonin reuptake inhibitor (SSRI) use was associated with reduced bone mineral density in the lumbar spine, especially in patients >55 years of age.

Researchers have not yet reached a consensus on the relationship between bone mass loss and the use of SSRIs, but bone mineral density is a strong predictor of risk for osteoporosis. Additionally, the findings of 1 animal study suggested that treatment longevity is positively correlated with lower bone mineral density in people taking SSRIs.

One reason that SSRIs may affect the likelihood of osteoporosis is that the drug antagonizes the serotonin transporter, 5-HTT. Previous research has demonstrated that “5-HTT activity is required for osteoclast differentiation.”

Investigators cautioned that some studies have opposed the observations they made in their meta-analysis. They also noted that the risk for osteoporosis increases with age, regardless of SSRI use. However, they added, clinicians should consider SSRI prescriptions more thoughtfully for older patients. 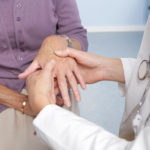