Children with oligoarticular and polyarticular forms of juvenile idiopathic arthritis (JIA) who discontinue biologic therapy before 2 years from remission have a high likelihood of disease relapse, according to the results of a multicenter, retrospective analysis published in Arthritis Care & Research.

The investigators sought to evaluate the time patients were in remission after discontinuing biologic therapy for the treatment of JIA. The primary study outcome was to assess, once remission had been attained, the time in remission up to the first disease flare after treatment withdrawal.

After discontinuing biologic therapy, 75.6% (102 of 135) of the participants experienced flares, with a median follow-up time in remission off therapy of 6 months (range, 3 to 109 months). Of enrolled patients who flared, 34.1% restarted the same biologic agent, 19.3% switched to another biologic, 4.4% reinitiated MTX, 11.9% received intra-articular corticosteroid injections, 2.2% received no treatment, and 0.7% were treated with another antirheumatic medication.

A significantly greater likelihood of maintaining remission after discontinuation of biologic therapy was reported in systemic-onset disease compared with the rest of the patients with JIA (P <.004).

The results of this study suggest that biologic therapy among patients in selected JIA categories should be continued for ≥2 years after attaining clinical remission. 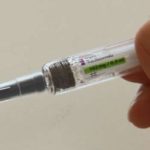