As part of a 9-month randomized clinical trial, 22 faculty provided either (1) increased direct supervision by joining work rounds, or (2) standard supervision by remaining available to residents and interns without joining work rounds. Each faculty member participated in both arms in random order. Of the 22 attending physicians, 8 (36%) were women and 15 (68%) had more than 5 years of experience. The primary study outcome was the rate of medical errors. Intern and resident education was evaluated per a time-motion study of participation during rounds. Surveys were also issued to interns, residents, and attending physicians to capture self-reported education outcomes.

A total of 1259 patients (5772 patient-days) were included in the analysis. Under standard supervision, the medical error rate was 107.6 (95% CI, 85.8-133.7) compared with 91.1 (95% CI, 76.9-104.0) per 1000 patient-days for increased supervision. The difference was not statistically significant (P =.21). Time-motion analysis of 161 work rounds indicated no difference in mean length of time spent discussing patients in the 2 supervision models (P =.99). Interns spoke less when an attending physician was present during rounds (P =.008), although residents did not. In surveys, interns reported feeling less efficient (P =.02) and less autonomous (P =.001) with an attending physician present. Residents reported feeling less autonomous (P <.001) in the direct supervision model as well, but not less efficient. However, attending physicians rated the quality of care higher when they participated in rounds (P =.04). 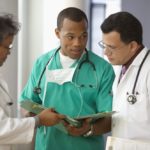