The epidemiology of psoriatic arthritis (PsA) and means of PsA treatment and prevention in patients with psoriasis were outlined in study data published in Psoriasis: Targets and Therapy.

PsA has an estimated prevalence of up to 30% in patients with psoriasis. In most patients with PsA, psoriasis precedes the development of PsA by an average of 7 to 8 years. It is theorized that both genetic and environmental factors contribute to the transition from psoriasis to PsA, although the exact mechanisms remain unknown. Systematic reviews have identified the gut and skin as possible sites of immune activation which later trigger the onset of PsA. As noted by the researchers, long-term risk factors for PsA include greater psoriasis severity, nail involvement, a family history of PsA, and obesity. In the short-term, arthralgia and subclinical evidence of inflammation often signal the development of PsA. This “subclinical” phase characterized by enthesopathy and imaging findings may be a critical window during which treatment could reduce the risk for incident PsA.

In a number of studies, systemic treatment with biologic agents has been associated with reduced risk for developing PsA. Conventional disease-modifying anti-rheumatic therapies show a similar relationship, although the preventive effects are less pronounced. However, evidence for both drug types is limited. The effects of topical psoriatic drugs are also unknown. Further research is necessary to better determine whether systemic treatment of moderate to severe psoriasis effectively reduces the risk of PsA.

“[T]he consideration of reduction of PsA development as new clinical endpoint in [psoriasis] clinical trials may be of great importance, particularly in the subset of [psoriasis] patients at high risk for transition,” study authors wrote. “The issue of ‘Treat the skin To Intercept PsA’ will be a fascinating challenge for the next years.” 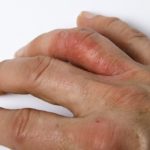