In patients with psoriatic arthritis (PsA), disease burden was found to be considerable across all disease severity classifications, according to results from a study published in The Journal of Rheumatology.

Of the 4.7 million individuals in Denmark, 10,577 people had been diagnosed with PsA. After analysis, the researchers reported that disease burden was considerable across all disease severities. In particular, they found that 53.0% of patients with PsA had received either no drug therapy or treatment with nonsteroidal anti-inflammatory drugs or systemic corticosteroids only. With respect to other therapies, 32.9% of patients had been given nonbiologic disease-modifying antirheumatic drugs, while 14.1% of patients had received biologics.

Other comorbidities, such as diabetes, hypertension, and psychological conditions were also commonly seen in study participants, but did not differ significantly across disease severities.

“The burden of disease appears to be significant in patients with PsA,” the researchers wrote.

“Nonetheless, these findings suggest a possible undertreatment of psoriasis and PsA symptoms in a considerable proportion of patients with these diseases,” they concluded. 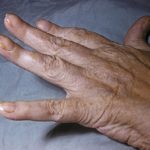