Patients with ankylosing spondylitis (AS) were found to have a 30%–50% increased risk of incident cardiovascular (CV) events compared to the general population, according to data from a cohort of patients in Sweden published in the Annals of the Rheumatic Diseases. The increased CV risk in patients with AS was about half of the risk found for acute coronary syndrome (ACS) and thrombotic events in patients with rheumatoid arthritis (RA).

Prior studies investigating the CV risks associated with AS have largely been heterogenous, with a lack of agreement among estimations of degrees of increased risk, particularly in comparison to the CV risk imparted by RA. “Heterogeneity in relative risks associated with AS, in combination with the differences in age and sex distribution….leaves some uncertainty with regard to the ‘true’ level of risk increase for cardiovascular disease (CVD) in AS,” the study authors noted.

Jonas Eriksson, PhD, with the Clinical Epidemiology Unit and Department of Medicine at the Karolinska Institutet, Stockholm, Sweden, and his colleagues therefore aimed to assess incidence rates of age and sex-adjusted CV events in patients with AS and RA, comparing these rates to those of the general population.

Researchers utilized the Swedish healthcare National Patient Register to identify patients with AS and RA, as well as baseline comorbidities including CVD, chronic obstructive pulmonary disease, diabetes, and malignancy utilizing International classification of diseases (ICD) codes. From the population, 3 cohorts of patients were identified: those with AS, those with RA, and general population comparators matched to birth year, sex, and county of residence.

Mortality rates for the RA and AS cohorts were derived from the Causes of Death Register, while mortality data for the general population comparators were derived from the Register of the Total Population. Medications utilized by study participants were captured from the Prescribed Drug Register, including non-steroidal anti-inflammatory drugs (NSAIDs), diuretics, β-blockers, ACE inhibitors, calcium blockers, aspirin, insulin, and statins.

When adjusted for age and sex, the crude baseline prevalence of comorbidities, with the exception of NSAID use, was the same in all cohorts.  Among those taking NSAIDs, 70% of the patients with AS had filled >1 prescription for an NSAID during the year prior to start of the study follow-up, compared with 58% of those with RA and 15% of those in the general comparator group.

This study was not able to quantify the excess risk associated with accumulated disease severity or treatment.

“Since the overall mortality in RA is higher than in AS, and since CV morbidity is linked to disease severity in RA, we cannot exclude that competing risks…might have underestimated the true difference in relative risks for AS and RA, at least in the older age groups,” the authors cautioned.

Eriksson JK, Jacobsson L, Bengtsson K, Askling J. Is ankylosing spondylitis a risk factor for cardiovascular disease, and how do these risks compare with those in rheumatoid arthritis?. Ann Rheum Dis. 2016; Published online ahead of print June 9, 2016. doi:10.1136/annrheumdis-2016-209315 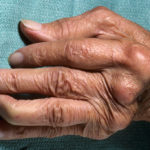