It has become widely accepted in the past decade that there is a preclinical phase of rheumatoid arthritis (RA) before the clinical symptom of joint swelling appears. This concept “has been largely supported by the observations that autoantibody production precedes the clinical onset of the disease by several years, demonstrating that the breach of immune tolerance precedes the onset of the inflammatory phase of RA,” according to the authors of a study currently in press for publication in Seminars in Arthritis & Rheumatism.

Autoimmunity has a significant influence on RA severity and pathological changes — including to the lungs and bones — that occur in the preclinical disease phase. For these reasons, researchers have turned more attention to autoimmunity beyond its simple usefulness as a diagnostic marker.

Because clinical symptoms present only after a certain level of inflammation has developed, it is critical to determine “when and how inflammation starts in RA and which anatomical structures are initially involved in the subclinical prodromal phase of the disease,” the authors wrote. Twenty participants at increased risk of developing RA — but showing no clinical signs — and with positive test results for anti-citrullinated protein antibody (ACPA+), were compared with 13 healthy controls.

Participants had been screened with a capillary blood test for the presence of anti-mutated citrullinated vimentin (MCV) and rheumatoid factor. All participants received magnetic resonance imaging (MRI) and high-resolution peripheral quantitative computed tomography (HR-pQCT) of their hands. “MRI sequences were scored for synovitis, osteitis and bone erosions… as well as for presence, localization and extent of tenosynovitis,” the researchers noted.

The findings showed that 25% of the ACPA+ individuals developed RA with a mean time of 3.6 months following the MRI. Tenosynovitis affected 80% of ACPA+ participants but none of the control participants. Patients who progressed to RA had experienced arthralgia and morning stiffness more frequently than patients who did not develop RA, possibly because all patients who developed RA had tenosyovitis in more than 2 areas.

Only 33% of patients who did not progress to RA, however, showed involvement of more than 2 sites. “Moreover, we found an anatomical correlation between the presence of MRI tenosynovitis and the later development of joint swelling,” with inflammation occurring in the flexor and extensor tendons, especially in the distal part of the hand, said the authors.

The additional measures show that synovitis was observed in 65% of ACPA+ participants vs 7% of controls, and it was equally spread between the wrist and finger joint regions; osteitis was found in 35% of ACPA+ individuals, most commonly in the proximal region (80%); and erosions were found in 60% of the ACPA+ group vs 30% of controls, and 81% of erosions were in the wrist joint region.

These findings offer new insight into the preclinical inflammatory and structural changes present in patients who have developed autoimmunity but not clinical symptoms of RA.

“In particular, the additional presence of tenosynovitis in the MRI and/or symptoms such as arthralgia or morning stiffness reveal clear pathological changes in the joints in this prephase of the disease, which may justify the initiation of treatment to prevent their progression to RA,” the authors concluded.

Research is currently being conducted to investigate the efficacy of time-limited treatment of such patients with disease-modifying anti-rheumatic drugs.

Kleyer A, Krieter M, Oliveira I, et al. High prevalence of tenosynovial inflammation before onset of rheumatoid arthritis and its link to progression to RA – a combined MRI/CT study. Semin Arthritis Rheum. 2016; Epub ahead of print May 18, 2016. doi:10.1016/j.semarthrit.2016.05.002 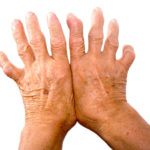 Serum Amyloid A: An Emerging Biomarker in Early RA?