The decision to use biologic disease-modifying antirheumatic drugs (bDMARDs) to treat arthritis is made after assessing the unique risk profile of a given patient. The risks that have been associated with bDMARD use, including risk of malignancy, should be weighed against the benefits of treatment.

To investigate whether female patients receiving bDMARDs for management of inflammatory arthritis are at increased risk of virus-associated cancers, researchers from the Herlev and Gentoffe University Hospital, Herlev, Denmark, analyzed results from DANBIO, a Danish registry that provides nationwide data on the disease course of inflammatory rheumatic diseases. They found no apparent overall excess of virus-associated cancers in the study cohort.

In this study, female patients with inflammatory arthritis who were never treated with bDMARDs were at increased risk for lymphoma. No other differences in incidence rates of virus-associated cancers were found between the bDMARD-treated and the bDMARD-naïve patients.

The statistical power of this study was limited by the relatively smaller number of specifically identified malignancies that occurred in women during the study period. The apparent increased risk of oropharyngeal cancer in bDMARD-treated patients compared with the general population warrants further study. 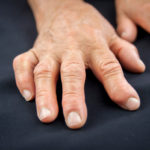 Examining the Link Between Arthritis and Falling Into Poverty