A significant association between periodontitis and rheumatoid arthritis (RA) was described in a recent systematic review and meta-analysis published in the journal Frontiers in Immunology.1

Periodontitis occurs when a tooth loses attachment to the gums, with and the resulting gap between tooth and gum leading to inflammation followed by colonization by anaerobic bacteria, tissue destruction, alveolar bone loss, and tooth loss if not properly treated. Major risk factors include cigarette smoking, diabetes, and age.2

A link between the production of anticitrullinated peptide/protein antibodies (ACPA), RA, and periodontitis has been proposed, as it has been shown Porphyromonas gingivalis turns citrullinated proteins into auto-antigens, which, in turn, leads to the production of auto-antibodies 3 Controversy exists about whether periodontitis is a precursor of RA, though—with some studies showing evidence and some not.2,3

The systematic review, led by Nidhi Sofat, PhD, from the Musculoskeletal Research Group and Institute of Infection and Immunity at St George’s University of London, United Kingdom, sought to bring greater clarity to the issue. It involved a search of MEDLINE, EMBASE, and PsycINFO databases for articles that compared periodontitis in patients with RA with healthy controls. Twenty-one studies, 17 of which compared patients with RA (n=14,849) with healthy controls (138,643) and 4 that compared patients with RA (n=654) with those with osteoarthritis (OA; n=724) were identified.

No statistically significant differences were seen regarding probing depth or plaque index; however, the risk of bleeding on probing was significantly greater in the RA cohort (P=.05).

A systematic review of the literature on incidence of periodontitis in patients with RA versus healthy controls confirmed an association between periodontitis and RA.

As is typical of systematic review, analysis was challenged by a number of factors, such as the heterogeneity of study designs and definitions used in the studied reviewed and periodontal disease itself. The authors called for further longitudinal trials to establish the mechanisms of and temporal nature of the association between periodontitis and RA, but concluded that the data do point to a link between the 2 conditions.

This research was conducted through a grant from St George’s Hospital Charity. 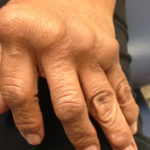