Methotrexate (MTX) initiated in the pre-rheumatoid arthritis (RA) stage of joint symptoms and subclinical inflammation does not prevent the development of clinical RA but modifies disease course, according to study results presented at the European Alliance of Associations for Rheumatology (EULAR) Congress 2022, held from June 1 to 5, in Copenhagen, Denmark.

In a randomized, double-blind, 2-year, proof-of-concept trial, researchers sought to evaluate whether intervention in the pre-arthritis phase of arthralgia and subclinical joint inflammation prevented the development of clinical arthritis and reduced the burden of disease.

The study was conducted among adults with arthralgia with a clinical suspicion of progression to RA and magnetic resonance imaging (MRI)-detected subclinical joint inflammation. Participants were enrolled in the study from rheumatology outpatient clinics in The Netherlands. They were randomly assigned 1:1 to receive a single intramuscular glucocorticoid 120 mg injection and a 1-year course of oral MTX or a placebo injection and tablets. Patients were then followed up for another year without any study medication.

The primary study endpoint was the development of clinically detectable arthritis (based on the 2010 RA criteria and involving ≥2 joints) for at least 2 weeks. Secondary endpoints included patient-reported physical functioning, as well as symptoms and workability.

The course of MRI-detected inflammation was also studied (ie, the sum of tenosynovitis, synovitis, and osteitis scored using the RA-MRI Scoring method).

All participants were also enrolled in the intention-to-treat analysis. There were 2 prespecified subgroup analyses: analyses were restricted in participants with a high risk of development of clinical arthritis (positive predictive value, ≥70%) and analyses were stratified for anticitrullinated protein antibodies (ACPA) status.

The MRI-detected joint inflammation was also persistently improved with treatment (mean difference in 2 years, -1.4 points; 95% CI, -2.0 to -0.9 points; P <.001). In the treatment group, high-risk participants exhibited a delay in the development of clinical RA; they developed the endpoint less often during treatment, but the frequencies became similar at 24 months (ie, 67% in both the treatment and the placebo groups). A similar delaying effect was seen among participants with ACPA positivity (48% in the treatment group vs 52% in the placebo group developed persistent clinical RA at 24 months).

Rates of serious adverse events were similar between the groups.

The researchers concluded, “These findings of sustained disease modification may open up a new treatment landscape in a pre-arthritis phase of RA, where limitations can be just as severe as at the onset of clinical arthritis.” 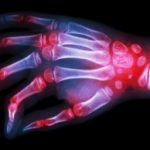