Musculoskeletal ultrasound (MSUS) assessments may be useful in detecting subclinical inflammation levels and predicting future joint erosion in patients with rheumatoid arthritis (RA), according to study results published in Rheumatology.

The ECHO study was a prospective, 2-cohort study of adult patients with moderate to severe RA who required a change in treatment because of lack of efficacy or physician recommendation. Investigators enrolled patients between December 2014 and April 2017 and assigned them to receive either MSUS-guided care or routine care for 1 year. They conducted study visits at baseline and at 3, 6, 9, and 12 months of follow-up. Outcome measures included achievement of low disease activity (LDA) or remission on the Clinical Disease Activity Index (CDAI); achievement of LDA or remission on the 28-joint Disease Activity Score for RA with Erythrocyte Sedimentation Rate (DAS28-ESR); achievement of MSUS erosion score ≥1; and patient-reported satisfaction and participation in disease management. Researchers calculated prevalence rates of LDA and remission for the MSUS and routine care groups.

Among patients in the MSUS group, 50% and 76.9% of patients who achieved CDAI and DAS28-ESR remission at 3 months, respectively, had an MSUS synovitis score ≥1. In addition, 37.5% and 50% had an MSUS erosion score ≥1, supporting the agreement between MSUS parameters and CDAI and DAS28-ESR disease activity. In logistic regression, greater baseline power Doppler synovitis score was associated with increased odds of DAS28-ESR remission at 9 and 12 months and increased odds of DAS28-ESR LDA at 9 months. Increased power Doppler synovitis and overall synovitis at baseline were also predictive of joint deterioration during follow-up.

In a cohort of patients with moderate to severe RA, MSUS parameters, including power Doppler score, were predictive of future joint deterioration. MSUS parameters were also associated with clinical remission. According to these results, investigators endorsed the use of MSUS in routine management of RA. 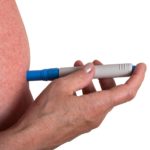