Common therapies for the treatment of rheumatic diseases have long been considered to have a negative impact on the development of a fetus. The most widely used disease-modifying antirheumatic drugs (DMARDs) — methotrexate and leflunomide — are generally contraindicated both during pregnancy and in the preconception period, but tumor necrosis factor (TNF) inhibitor therapies are considered safe during early pregnancy.1

“There are no specific protocols. We customize the treatment to the patient characteristics, preferences, and the activity of underlying disease,” Petros Efthimiou, MD, clinical professor of medicine and rheumatologist at NYU Langone Health, Cobble Hill, in Brooklyn, New York, told Rheumatology Advisor. “Fortunately, pregnancy is an endogenous hypercortisolemic state and the disease often improves so that we can often can discontinue DMARDs.”

For those patients who continue to have disease activity during pregnancy, new concerns have been raised about the risks posed to both mother and child by inadequate rheumatic disease management. Recent investigations have pointed to a more stratified approach toward the use of potentially teratogenic agents in both women and men to include available DMARD therapies that more effectively control rheumatic disease while preventing fetal damage during pregnancy.

A European League Against Rheumatism (EULAR) task force released new considerations of DMARD therapies in 2016,2 including biologic DMARDs (bDMARDs), which vary in structure, half-life, and placental passage. The task force agreed (90% to 100% consensus) that many antirheumatic drugs can be used during pregnancy and lactation without measurable evidence of harm to the child. These include glucocorticoids, sulfasalazine, antimalarial agents, azathioprine, colchicine, tacrolimus, and intravenous immunoglobulin therapies.2

Beyond these, some bDMARD therapies, such as TNF inhibitor agents should be considered during early pregnancy.2 The EULAR task force reported that etanercept can be used until 30 to 32 weeks of pregnancy. Infliximab and adalimumab should be stopped by 20 weeks.2 Evidence for other bDMARDs (certolizumab, golimumab, abatacept, toclizumab, rituximab, belimumab, and anakinra) is not sufficient to support their use during later pregnancy and lactation; however, no evidence of harm has been indicated before conception or during the first trimester of pregnancy.1,2

“Among biologic DMARDS, TNF inhibitors have the most data and are generally considered safe (pregnancy category B). Among the TNF inhibitors, there are some data suggesting that certolizumab does not cross the placenta and is not found in the umbilical blood,” Dr Efthimiou said.

Dr Efthimiou noted that it is important to discuss the fetal risks in advance with women of childbearing age. “Some traditional DMARDs, such as leflunomide, have a very long half-life, and it may take a long time (2 years) to be washed out of the system prior to any attempts of becoming pregnant,” he stated. “A detailed discussion of the risks will help patients and physicians choose the preferred antirheumatic agent and make decisions about contraception.”

Paternal Use of DMARDs

Men are often counseled to take a precautionary holiday from DMARD therapy prior to conception to prevent any negative impact. However, recent data have been reassuring regarding paternal contributions to teratogenic risks from use of DMARDs, according to a review by Bazzani et al.1 Researchers found that while the evidence still supports a potential for impaired fertility in men taking DMARDs, paternal exposure to these drugs is not likely to have a negative impact on pregnancy outcomes.1

Long-term data on outcomes of children exposed to rheumatic disease therapies during or prior to pregnancy is lacking. A study published in 2014 indicated that children exposed to TNF-α antibodies had a higher frequency of infections in infancy, but had no other significant health or developmental differences compared with other infants.3 These findings were supported by a report by Andreoli et al, which found that children who were exposed to TNF-α antibodies in utero had no differences in birth parameters, congenital malformations, and developmental steps compared with controls.4

Preconception counseling for women should include a discussion about potential teratogenic therapies, particularly biologic agents that can cross the placenta in the later stages of pregnancy. Many standard DMARDs and biologic TNF-α inhibitor therapies should be considered to maintain rheumatic disease control both before and during pregnancy.

Biologic agents can be used in early pregnancy and should be stopped when the drug crosses the placenta and accumulates. “Since several biologics are considered safe (pregnancy category B), we do not have to worry about finding efficacious agents in rheumatoid arthritis for either pregnancy or lactation,” Dr Efthimiou said. Biologic therapies in men do not appear to pose risks to pregnancy.1

Rheumatic disease therapies can be customized to patient needs in accordance with the increasing amount of data being accumulated on their clinical use. “There are several registries, both in the United States and internationally, that collect data on pregnancy outcomes for patients taking DMARDs during pregnancy,” Dr Efthimiou said. “This has been very helpful so far and it will continue to be helpful as more novel agents become part of our armamentarium.” 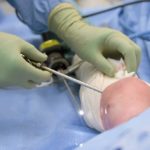