Among patients with rheumatoid arthritis (RA) in remission or with stable low disease activity, discontinuing treatment with a tumor necrosis factor inhibitor (TNFi) resulted in more disease flares in many patients at the 12-month mark as compared to those who continued TNFi treatment. These results were recently published in Arthritis & Rheumatology.

A total of 817 study participants who met definitions of remission or low disease activity were randomized 2:1 to either stop TNFi treatment or continue TNFi treatment. Disease flare was defined as a DAS28 of ≥3.2 within 12 months plus an increase in DAS28 score by ≥0.6 from baseline.

Patients in the stop group also had a higher mean DAS28 than those in the continuation group (P < .001).

Hospitalizations were also more common among patients who stopped treatment (6.4%) than among those who continued treatment (2.4%), although most instances were not considered to be intervention-related.

“Although patients in the TNFi stop group were clearly at increased risk of experiencing a flare within 12 months, the finding that even among patients with established RA, almost one-half were able to stop their TNFi treatment could be considered a promising result,” the authors noted.

Restarting treatment quickly and effectively regained low disease activity among most patients in the stop group who experienced a flare.

“In conclusion, this study showed that stopping treatment with TNFi in RA patients whose disease is in remission or who have stable low disease activity results in substantially more flares than does continuation of TNFi treatment,” the authors wrote.

This study was funded by The Netherlands Organization for Health Research and Development (ZonMw) and the Government of The Netherlands, Ministry of Health, Welfare, and Sport. The authors report no relevant disclosures. 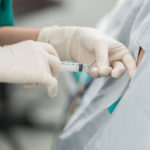