SB5, which has been approved by the European Commission as a biosimilar to adalimumab, demonstrated equivalent efficacy and similar safety compared with reference adalimumab in patients with rheumatoid arthritis (RA), according to a study published in Arthritis & Rheumatology.

In this phase 3, double-blind, parallel-group, 52-week study, researchers randomly assigned 544 patients with moderate to severe RA who were on methotrexate to receive either SB5 or adalimumab 40 mg subcutaneously every other week. Demographics and baseline characteristics were comparable between the SB5 and adalimumab groups, except for a statistically significant difference in mean age (49.8 vs 52.5 years, respectively, P =.010).

The primary efficacy end point — American College of Rheumatology 20% (ACR20) response rate at week 24 — was equivalent for patients receiving SB5 and adalimumab (72.4% and 72.2%, respectively; the adjusted difference of 0.1% [95%CI, -7.83% to 8.13%] was within the predefined equivalence margin). Similar responses between the groups were demonstrated for other efficacy end points, including ACR50 and ACR70 responses, time-response curves, and changes from baseline in disease activity. Patient age did not appear to affect the efficacy results.

The authors found that SB5 appears to be equivalent to adalimumab in efficacy and safety in patients with RA. “SB5 was well tolerated and possessed comparable [pharmacodynamics], safety, and immunogenicity profiles to those of adalimumab,” the investigators concluded. 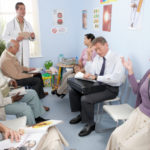