In a prospective study of patients with early rheumatoid arthritis (ERA), researchers from Leuven, Belgium found that returning to normality was at the core of patients’ preferred outcomes. This desire to return to normalcy included physical, mental, and participatory aspects, with nuanced changes as interviews progressed, but with pain management remaining prominent. These findings were recently published in Arthritis Care & Research.1

While these findings echo previous research conducted on preferred outcomes in ERA, this study was the first to explicitly look at the early disease period and to revisit the same study participant at several time points, allowing for longitudinal analysis of patient-preferred outcomes as RA disease progresses.

In this longitudinal, qualitative, explorative study, researchers interviewed 26 patients with ERA 4 to 6 months after they began targeted treatment.

Two interviews were conducted for every patient who was willing to participate in both. The first was an individual interview, the second was a focus group.

Fourteen of the participants took part in 1 out of the 3 focus groups at least 1 year after treatment began. Interviews were audio taped, transcribed, and analyzed using the constant comparison method.

A summary of the findings is presented below. (Table 1)

For the first time to the researchers’ knowledge, health and treatment outcome preferences of patients with early rheumatoid arthritis were prospectively determined.

While previous studies found similar results — that achieving “normality” was a major goal of participants — these studies interviewed participants in different contexts. The current study is unique in its prospective design.

“Our study showed shifting outcome preferences in the early stages after RA diagnosis and treatment initiation, with normality as an overarching theme,” the authors noted.

These findings, along with previous findings that quick diagnosis and effective treatment led patients to feel like they had regained normal life, suggest that quick action is paramount, and that there may be a new opportunity for preventing progression of symptoms.

“Health care professionals should endeavor to meet patients’ initial normality construct in all its aspects, to help them adjust to RA in a healthy way, and to intervene before illness-as-burden beliefs get rooted. Nurses can be seen as pivotal in providing such necessary psychosocial care,” the authors noted.

The researchers concluded that in early rheumatoid arthritis, clinicians should:

“Moreover, this study showed us that newly diagnosed patients with RA prefer a rapid and prolonged treatment response, preferably without side effects and without long term medication use,” the authors wrote.

The authors report no disclosures. 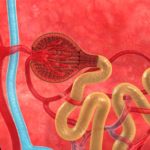 Persistently High CRP Is Risk Factor for CKD in RA