Although wearing gloves reduces the burden of Raynaud phenomenon (RP), there is no additional benefit to using 8% silver-fiber gloves compared with normal gloves in patients with systemic sclerosis (SSc), according to study results published in Rheumatology (Oxford).

A multicenter, double-blind, randomized, crossover trial was conducted to evaluate the clinical utility of silver-fiber gloves that transport heat from the palm to the fingers, possibly decreasing the burden of RP in patients with SSc.

The primary efficacy endpoint was the Raynaud Condition Score (RCS) over time, which was measured on a scale from 1 (no symptoms) to 10 (extreme symptoms), with the minimal clinically important difference being 1.4. Secondary efficacy endpoints included frequency and duration of RP attacks, impact of RP attacks on patients’ daily functioning (numeric rating scale [NRS] of 1 to 10), and an NRS score (from 1 to 10) regarding warmth of the hands.

An attack of RP was defined as an episode of at least a 2-phase color change in the fingers in response to cold exposure or emotion, which included pallor and/or cyanosis and reactive hyperemia associated with local discomfort.

Early termination occurred if patients developed vascular complications or an increase in RP burden indicative of a change in vasoactive medication, as assessed by the treating physician; or if patients had an allergic reaction to the gloves.

A total of 85 patients with SSc were included in the trial, with 78 completing the study. Participants’ mean RCS at 2 weeks prior to the study (ie, without any gloves) was 6.4±1.6. The mean RCS decreased to 3.9±2.3 both with silver-fiber gloves and normal gloves, with a similar course over time.

No difference in mean RCS was reported over time between normal gloves and silver-fiber gloves (β, 0.067; 95% CI, -0.006 to 0.19). Regarding secondary efficacy outcomes, total Scleroderma Health Assessment Questionnaire (β, 0.036; 95% CI, 0.026-0.046) was slightly higher with silver-fiber gloves. However, this finding was not clinically relevant.

The study was limited by the fact that RP burden prior to initiation of the trial was evaluated according to self-report of the patients, based on questions posed by their treating physician at the outpatient clinic. Thus, although recall bias might have occurred, potential recall bias should have affected the results with both normal and silver-fiber gloves at the same rate because of the randomized, crossover study design.

The study authors concluded, “Based on this study there is no basis for rheumatologists to specifically recommend 8% silver-[fiber] gloves over normal gloves to decrease the burden of RP, as measured in this study by RCS, in [patients with] SSc.” 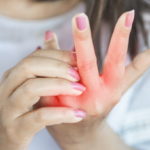