As the temperatures drop in many areas, Raynaud phenomenon (RP) will most likely be seen in an increasing number of patients. RP is characterized by reversible bouts of digital vasospasm that are an exaggerated response to physical, chemical, or emotional stress.

The secondary form can also be due to a vibration injury, medication, hematologic disorder, or an endocrine disorder.2 The differences between the two forms are imperceptible to the naked eye. Therefore, during the work-up of a patient with RP, laboratory studies are an important tool for differentiating between the primary and secondary forms.

The etiology and pathogenesis of RP have yet to be explained or understood completely, but several factors are thought to have a role. The average age of patients is 47.2 years in European countries and 53.5 years in the United States.1 In a randomized trial conducted in California that analyzed 162 patients with RP, 80.5% were found to be non-Hispanic whites, 0.6% were Native Americans/Alaskans, and 1.2% were Asian/Pacific Islanders.1

As for gender patterns within the United States, the prevalence is 9.6% in women and 5.8% in men.1 A heightened prevalence of RP has also been noted in male smokers and in women with a high rate of alcohol intake.1

Most clinicians can make the general diagnosis of RP by taking a history of the patient’s symptoms. The more challenging aspect is deciding whether the symptoms are arising independently or because of another condition. In other words, does the patient have the primary or secondary form? A patient with RP will present with either a “triple” or “double” color change in the affected digits.

The triple color change includes pallor (indicating ischemia), cyanosis (indicating deoxygenation), and erythema (indicating reperfusion); the double color change may present as pallor plus cyanosis or cyanosis plus erythema. The average length of a vasospastic episode is 20 minutes, but an episode has the potential to last for several hours. Symptoms typically subside with return to a warm room or placement of the affected body part in warm water.

Work-up of the patient with Raynaud phenomenon

It is imperative to determine whether a patient has primary RP or the secondary form with an underlying cause. Nailfold capillaroscopy and specific serologic testing are the most commonly used tools in the work-up of a patient with vasospastic attacks. The morphology of nailfold capillaries is examined by placing a drop of immersion oil onto the cuticle and viewing the region with a high-power magnification device.2 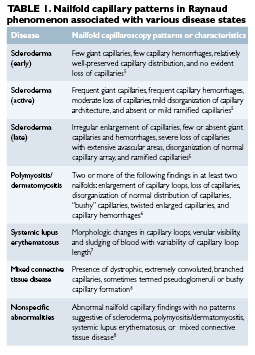 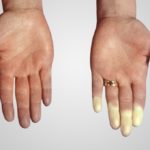