Investigators of this retrospective, nationwide database study sought to evaluate the role of SSc in determining the long-term risk for bleeds in the upper and lower GI tracts.

The study included data of 3665 patients diagnosed with SSc and 18,325 healthy controls matched by age, sex, and index date. Researchers used the Catastrophic Illness Patient Database and the National Health Insurance Research Database in Taiwan from 1998 to 2007 to collect data of patients who were followed-up until the diagnosis of GI bleeding, death, withdrawal from the insurance program, or the end of 2008. After adjusting for age, sex, comorbidities, concomitant medication use, and time-dependent covariates, investigators compared the risk for GI bleeding among participants with and without SSc; peptic and nonpeptic ulcer bleeding were also evaluated.

Study limitations included a lack of data on disease duration and severity and the fact that diagnoses were not based on classification criteria recognizing early or mild SSc symptoms. Only GI bleeding events that warranted hospitalization were included, and patients with obscure GI bleeding who did not undergo endoscopy or enteroscopy may have been misclassified. Demographic and patient characteristics, including smoking status, alcohol use, and nutrition, were not provided. Finally, the investigators were not able to calculate over the counter nonsteroidal anti-inflammatory drug use.

Overall, patients with SSc were found to be at significantly higher risk for GI bleeding events compared with individuals without SSc.

“Gastroenterologists, rheumatologists, and primary health care providers should be aware of GI bleeding risk in [patients with] SSc, and esophagogastroduodenoscopy and monitoring for GI complications should be considered,” the researchers concluded. 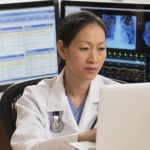