Human leukocyte antigen (HLA) genes, autoantibodies, and environmental triggers may collectively play a role in the pathogenesis of systemic sclerosis (SSc), according to study results published in Proceedings of the National Academy of Sciences of the United States of America.

Previous studies have shown that HLA alleles have been associated with risk for scleroderma. Researchers of this study investigated the relationships between HLA alleles and autoantibody subsets that may promote the pathogenesis of SSc among patients with black and white backgrounds.

Among patients who were white, 3 independent HLA classical alleles were significantly associated with SSc risk: HLA-DQB1*02:02, HLA-DPB1*13:01, and HLA-DRB1*11:04. The HLA-DQB1*02:02 allele was found to be disease-protective in this population (OR, 0.5 [95% CI, 0.4-0.6]), and the HLA-DPB1*13:01 and HLA-DRB1*07:01 alleles were found to be more strongly associated with antitopoisomerase and anticentromere antibody-positive subsets of SSc compared with the overall SSc risk.

Researchers observed a direct correlation between SSc prevalence in any population and the frequency of HLA-DPB1*13:01 with a correlation coefficient of 0.98 and P =1.8 × 10-6. They revealed through conditional analysis that several amino acid residues were associated with SSc, most of which were part of the peptide-binding groove of class II HLA molecules. They also bioinformatically predicted immunodominant peptides of self-antigens (topoisomerase 1, fibrillarin, and centromere protein A) and found these were homologous to viral protein sequences from the Mimiviridae and Phycodnaviridae families.

Researchers emphasized the relevance of class II HLA genes in the pathogenesis of SSc and that scleroderma-specific autoantibodies may suggest potential molecular mimicry in this disease. 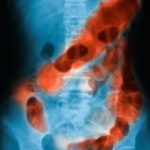 Systemic Sclerosis May Be Associated With Risk for Gastrointestinal Bleeding