Spinal radiographic damage progression can be observed after just 2 years follow-up in patients with early axial spondyloarthritis (axSpA), according to data published in Arthritis Care & Research. Higher radiographic progression was associated with increased inflammation and damage, while the presence of baseline syndesmophytes was predictive of later structural damage even in the early stages of disease.

Researchers extracted data from the DESIR cohort study, a 10-year follow-up of inflammatory back pain conducted in France. Patients with axSpA and available cervical and lumbar spinal radiographs were included in the present analyses (n=549). Radiographs had been performed at baseline and at 2 and 5 years follow-up, according to the DESIR protocol. The presence of syndesmophytes was captured at each radiographic visit. Analyses were performed by patient subgroup defined at baseline according to the Assessment of Spondyloarthritis International Society (ASAS) criteria, the modified New York Criteria (mNYC), and the presence or absence of syndesmophytes.

Patients who were positive for axSpA per the ASAS criteria were further divided into imaging and clinical groups, based on which measures were available from the DESIR dataset. Patients in the imaging group had magnetic resonance imaging (MRI) data available, through which they were classified as either positive or negative for axSpA. Patients in the clinical group were instead classified based on C-reactive protein positivity. Radiographs were scored using the modified Stoke Ankylosing Spondylitis Spine Score (mSASSS), with an mSASSS value >0 indicating axSpA progression.

According to these data, it appears that spinal radiographic damage progression can be captured at 2- and 5-year follow-up in individuals with early axSpA. The imaging group indicated more progression than the clinical group, with the highest progression observed in patients with MRI-positive axSpA who fulfilled mNYC. Inflammation and damage in the sacroiliac joint according to ASAS and mNYC appear to be associated with higher spinal radiographic progression. In addition, syndesmophytes seem to be predictive of further structural damage. Further research is necessary to explore the influence of sociodemographic factors on radiographic progression, including gender, HLA-B27 positivity, smoking status, and medication use. 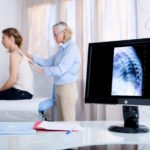