Researchers enrolled in the study patients aged >18 years with PsA who received or were eligible to receive biologic therapy and/or conventional systemic agents for psoriasis in PSOLAR. The cohort for this study included 4315 patients with psoriasis with a self-reported diagnosis of PsA, of whom 1719 reported that that their diagnosis had been confirmed by a provider.

Investigators stratified patient data based on exposure to specific biologic or nonbiologic therapies, including ustekinumab, infliximab, adalimumab, etanercept, all other biologics, nonbiologic/methotrexate (MTX), and nonbiologic/non-MTX.

Patients in the nonbiologic/non-MTX cohort had the highest use of systemic steroids (23.1%). In the biologic cohorts, MTX was the most commonly used immunomodulator, which was reported being used by 60.1% of patients in the infliximab group. Overall, 77.8% of patients had a history of biologics use, with 41.5% having used only 1 biologic.

Serious infection rates were highest in the etanercept, infliximab, and adalimumab cohorts (2.58, 2.12, and 1.99, respectively). In the ustekinumab cohort, patients had a numerically lower incidence rate (1.00) among individually tested biologics compared with the rates reported in 2 nonbiologic cohorts. No serious infection events were reported in the other biologics cohort.

Study limitations included those inherent to the observational nature of the research, possible treatment selection, recall, and reporting biases, and the use of self-reported PsA data, which may not reflect the patients in the general rheumatology population.

“Our results showed that rates of [serious infections] were numerically higher among patients [with self-reported PsA] receiving [TNFis],” the researchers concluded. “Continued follow-up of these patients [with PsA] in the ongoing PSOLAR registry will provide additional safety information regarding patients with PsA in general.”

Disclosure: This clinical trial was supported by Janssen Biotech Inc. and Horsham, PA, USA. Please see the original reference for a full list of authors’ disclosures. 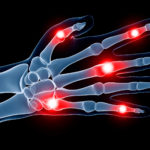 Early and Sustained Enthesitis Resolution With Secukinumab in Psoriatic Arthritis