The recurrence of fetal cardiac conduction disturbances in the fetuses of women expressing anti-Ro/SSA antibodies is higher than previously reported and may be influenced by the season of the year and maternal age, according to the results of a recent study published in Rheumatology.

The investigators sought to evaluate the impact of factors previously linked to congenital heart block on the occurrence of milder forms of disturbance in the fetal cardiac conduction system. Between 2000 and 2015, a total of 212 anti-Ro/SSA antibody-positive singleton pregnancies in 155 women were followed during the mid-trimester at a tertiary referral center for fetal cardiology. The protocol was comprised of weekly fetal echocardiographic examinations during weeks 18 to 24 in pregnancies considered at risk for congenital heart block.

Signs of abnormal atrioventricular conduction in utero were identified in 92 fetuses; 1 died unexpectedly at 32 weeks gestation. A second- or third-degree atrioventricular block (AVB II-III) developed in 2 and 5 fetuses, respectively.

Atrioventricular time intervals were significantly longer in fetuses observed during the winter vs the summer months (z-scores, 1.63±1.19 years vs 1.13±1.05 years, respectively;P =.022). In addition, fetal AV time intervals recorded during consecutive pregnancies from the same woman were significantly correlated, with an association between abnormal fetal AV conduction during the first pregnancy and a longer AV conduction in the next pregnancy (P <.001). AVB-III was observed at birth in 38% of babies born after a prior sibling with fetal AVB II-III.

The investigators concluded that AV block is more likely to develop in the fetuses of older mothers, and that the season of the year may influence AV conduction time in fetuses of mothers with anti-Ro/SSA autoantibody. 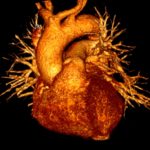