Involvement of the skin and mucous membrane affects more than 80% of patients with systemic lupus erythematosus (SLE).2

Recognizing that many of the SLE diagnostic criteria are cutaneous in origin, Medlin and colleagues at the University of Wisconsin in Madison performed a systematic review and meta-analysis of 35 studies to examine the differences in cutaneous manifestations in early-onset vs late-onset SLE. 2

The authors postulate that a decline in immune competence, or immunosenescence, may be contributing to the fewer cutaneous symptoms found in patients with late-onset lupus.

A meta-analysis of patients with SLE has shown that cutaneous manifestations are less common in late-onset SLE.  Healthcare providers should be aware that this subset of patients often do not display the characteristic malar rash associated with SLE. 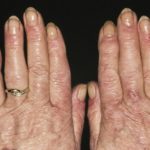 Care Model Linked to Remission and Low Disease Activity, But Not Quality of Life, in SLE