Patients with moderate to severe systemic lupus erythematosus (SLE) treated with belimumab plus standard of care for up to 6 years appear to have a low incidence of organ damage accrual. In addition, patients treated for more than 5 years appear to face no new safety issues, according to a study published in Lupus.

“We showed that damage is being prevented, and we showed that patients taking the drug long-term didn’t have significant side effects,” said study coauthor Murray Urowitz, MD, director of the Centre for Prognosis Studies in the Rheumatic Diseases and professor of medicine at the University of Toronto, Toronto, Canada in an interview with Rheumatology Advisor. “The incidence of serious side effects was very low. The vast majority were minor.”

Dr Urowitz and his colleagues examined pooled data from 2 ongoing open-label studies that enrolled patients who completed the Belimumab in Subjects With Systemic Lupus Erythematosus (BLISS)-52 or BLISS-76 trial. In these studies, patients with SLE received belimumab every 4 weeks plus standard of care. Systemic Lupus International Collaborating Clinics/American College of Rheumatology Damage Index (SDI) values were assessed every 48 weeks following belimumab initiation. The primary endpoint was change in SDI from baseline to Study Years 5 to 6.

Belimumab (Benlysta) is a human monoclonal antibody that inhibits B-cell activating factor  is known as a B-lymphocyte stimulator; however, it is expensive and comes with adverse effects. There has been a lack of long-term data on the risks and benefits in patients with SLE.

The study included 998 patients (mean age: 38.7 years; 94% female), and mean disease duration was 6.7 years. The mean Safety of Estrogen in Lupus National Assessment-Systemic Lupus Erythematosus Disease Activity Index score was 8.2, and the mean SDI score was 0.7. At baseline (pretreatment), 411 (41%) patients had organ damage. Over the course of 5 years, 427 (43%) withdrew from the study. The most common reasons were patient request (17%) and adverse events (AEs; 9%).

The study authors noted that potential mechanisms for the lower rate of damage accrual observed include better overall control of inﬂammatory disease activity, which could be due to lower corticosteroid doses, and reductions in ﬂares, which contribute to future damage and which may be reduced with belimumab therapy.

“We don’t know how good the responses were. We know what the risks are, and the benefit is that the patient is getting better in terms of the disease. But this study doesn’t address how much better a patient is now compared with 6 years ago,” Dr Urowitz said in an interview with Rheumatology Advisor. “This study does not address the risk/benefit analysis of belimumab. All you can say is that patients receiving it are not incurring significant damage.”

The findings show no new safety issues at 5 years after a patient’s ﬁrst dose of belimumab. The researchers observed a lower overall progression of organ damage in this analysis compared with that seen in observational studies. They believe that the higher progression seen in observation studies may be due, in part, to the fact that a full spectrum of patients with SLE are included in observational cohorts, including those with predominant lupus nephritis and central nervous system disease. Patients with these manifestations were excluded from the BLISS studies. 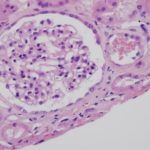