Multianalyte assay panel testing may be an effective tool for facilitating the diagnosis of systemic lupus erythematosus (SLE), according to study results published in Lupus Science & Medicine.

Overall, results indicated that there was lower likelihood of SLE detectable among patients who tested negative for MAP/CB-CAPs compared with those who underwent standard diagnosis testing (60% vs 37%; difference, 23%; P =.012). None of the patients in the MAP/CB-CAPs group had higher posttest likelihood of SLE in conjunction with negative test results.

At study enrollment, patients who presented with a positive MAP/CB-CAPs test had higher physician global assessment compared with those who achieved negative test results (1.44±0.14 vs 1.10±0.05; P =.030). At 12 weeks follow-up, a higher improvement in physician global assessment was noted in the MAP/CB-CAPs vs the standard diagnosis laboratory testing arm (-0.39±0.08 vs -0.29±0.06). Compared with the MAP/CB-CAPs group, more patients in the standardized diagnosis group (6% vs 10%) received either prednisone or hydroxychloroquine therapy.

In addition, among patients in the MAP/CB-CAPs group, a positive test result was associated with increased EQ5D-5 level index scores from study enrollment to visit 2 and greater improvements in patients who tested positive and randomly assigned to the standardized diagnosis arm (mean, 0.099±0.046 vs -0.008±0.050; P =.049).

“Our data suggest that MAP/CB-CAPs testing [have] clinical utility in facilitating SLE diagnosis and treatment decisions,” the researchers concluded.

Disclosure: This study was supported by Exagen. Please see the original reference for a full list of authors’ disclosures. 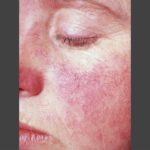