Worse communication with providers and lower self-efficacy were associated with systemic lupus erythematosus (SLE)-related damage in African American but not White patients, according to study results published in The Journal of Rheumatology.

Racial disparities in SLE in minority populations, such as increased disease prevalence and severity, are influenced by factors including socioeconomic status and community characteristics. Clinical encounters can also contribute to racial disparities in SLE, particularly patient-provider communication, which can affect self-efficacy.

In the current cross-sectional study, researchers examined racial differences in patient-reported self-efficacy and patient-provider communication, as well as other factors, associated with SLE damage.

A total of 121 patients with SLE were included in the study; 63% were African American and 37% were White. African American patients were younger, more likely to be on Medicaid, and less likely to be college educated or married. They also reported better social function, less fatigue, and greater medication complexity, and had higher SLE disease activity and SDI. African American vs White patients reported similar levels of self-efficacy but more hurried communication with their provider and greater use of difficult words by their provider. SLE damage was associated with lower self-efficacy and providers’ use of difficult words with African American patients but not White patients.

Limitations of the study included a small sample size, limited data, inability to determine causality due to the cross-sectional study design, enrollment of participants from a tertiary clinic that may not be a representative population, possibility of better self-efficacy among the selected individuals, skewed positive responses due to social desirability, and the use of chart review to calculate SDI. 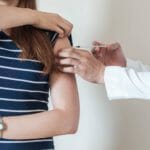